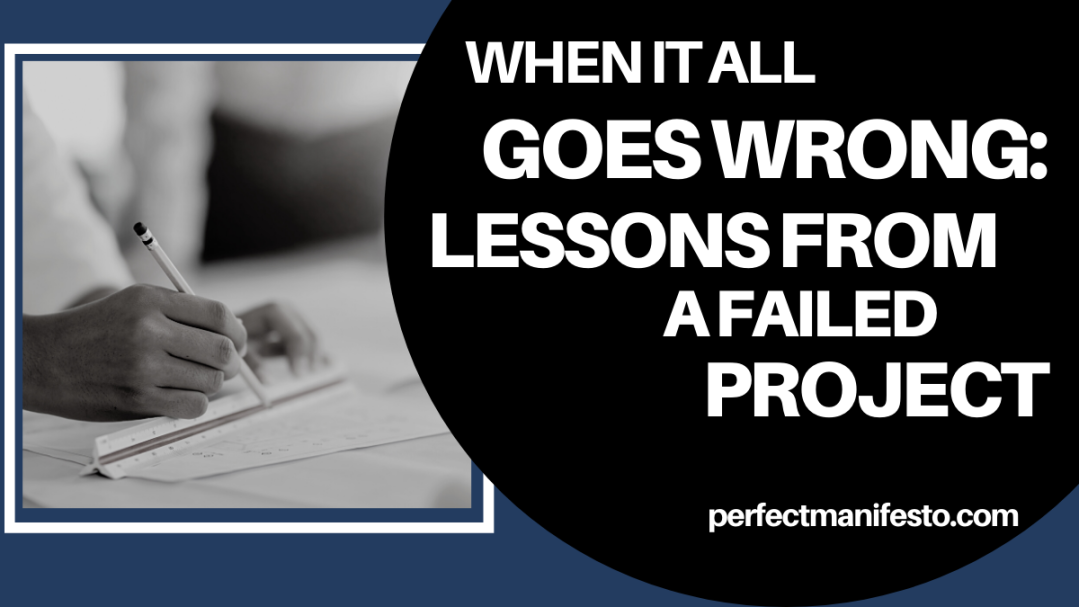 When it All Goes Wrong: Lessons from a Failed Project

Over the last five years I’ve worked hard for my company.

When I started, my role was performing lots of mundane tasks like ensuring the photocopier paper was fully stacked.  Yes, these jobs were crap only because some lazy guy in management didn’t want to get his hands dirty when he went for his printout.

Regardless of duty, it’s always been a major source of pride to push myself to prove how much more I can offer.  This has resulted in getting a few promotions along the way.

A couple of years ago I had a major breakthrough, being given responsibility for leading my own project.  Every so often my manager checked in to reassure all was going well, but I was mostly left to get on with it because the level of trust in me was so high, they knew I wouldn’t mess it up.

As the project completed it’s second phase, I’d calculated I’d made massive company saving from my efforts.  It was deeply satisfying to know I was making such a difference.

Then I got the call.

Yes, I was exceeding expectations, my manager reassured me, but I had to shut down early dues to other pressing team priorities.

This news devastated me, and for a while I sunk into a deep depression, with nothing but anger towards the system.  It took me a while, but after having lots of thinking time to put the situation in perspective, here is what I learnt when it all goes wrong…

Sometimes the world has other plans…

The whole experience was an awakening, you can do things right, but life doesn’t always want to follow your plans, even if you are doing something good and will quite happily take it from you overnight.

When faced with this situation we need to try and take an outside view, looking beyond personal feelings.

By detaching myself from the situation, I started to see that none of this was personal, it wasn’t a judgement of my abilities, just the work I was doing wasn’t top priority.

You may have ambitions that you want to achieve, which you put a lot of time and effort into, but there will always be outside forces in the universe that have other ideas.

Life and managing projects are alike, you often are moving forward into the unknown, where anything can knock you off your tracks, it’s simply figuring out what has happened and adapt to the new world.

When the system fails you, don’t fail yourself…

As I continued to feel sorry for myself, I became more jaded with the system and my performance tanked.  Through boredom and rebellion at the new task assigned, I phoned in my performance, and out of spite I focused on giving them the employee they deserved.

Then by chance I listened to a talk by Jim Rohn, which changed my whole attitude.  I can’t quite remember the exact quote, so I’ve paraphrased it based on how I remember:

“To find the next job, you need to perform to the best of your abilities in your current job.”

This idea was powerful – by getting stuck in self-loathing you can end up being on the path to failure.  My lack of work satisfaction crept into my home life, which wasn’t fair on my wife and kids.  I had to get my shit together.

It’s inevitable you’re going to get screwed over multiple times in life, whether it’s a job or something else, it’s important to deal with it and move on.  Just because life isn’t being good to you at any point, doesn’t mean you should give up, quite the opposite.

When the project came to an end, I got together with people closely attached to find out how I could do things differently in the future.  It was a source of relief that premature closure wasn’t down to my own performance but wider issues.

Not only was I able to let go of wider personal responsibility, it gave me a terrific insight into the types of company politics that impact my sector, this has allowed me to take these challenges into consideration when undertaking future projects.

Everything that happens in your life is an opportunity to learn.  Even when something goes wrong, it’s good to ask yourself what you have gained from it.  Make a note of these ideas, write about it if you wish, this will be a major aid to your self-growth.

Your ability to recover is an underrated attribute.  If you can recover faster mentally then you have a strategic advantage, it allows you to throw yourself back into the challenges you face and can be the difference between success and failure.

My biggest regret with the project, was allowing this setback to impact me for too long.  People were patient with me because of my past excellent performance, but by the time I was ready to perform again I’d already done a lot of damage to my reputation, and the trust never quite returned to giving me challenging work in that team again.

When something goes wrong, you can’t allow perceived injustices to impact you, you need to move on, or things will get much worse.

Every action you take in life, there is something good to gain from it.

Every mistake you make in life, is simply filtering out what you know you won’t do again, allowing you to learn more about yourself as a person.

Your personal growth does not come from achieving a goal or finishing a project, but all those steps you took to get there.  Even in failure, there are many good things.

Working on a project gave me a wealth of practical experience and I was proud of the cost savings made, working for the public sector this attributed to an annual saving of £50,000 per year of tax payer’s money (an achievement I’ve milked effectively on my CV).

Although things didn’t go as planned, there was lots of good things to take from it.

Don’t get too attached…

The project was a source of pride, you could say it was laced with my DNA, defined by how I approach a task and it was flourishing because of my drive and vision.

I’d become one of those people who became too attached to the project, it was my baby, except it wasn’t.  When you work for someone else you have to remember – nothing is yours.  This means anything you are given can easily be taken away at any time, for any reason.

You’ve probably seen this yourself, someone who you’ve worked in a team with, they are the expert and know absolutely everything about the area of work.  But in time things change and they decide they don’t need that person anymore – maybe because of his resistance to change, or the company identifying some areas for cost saving, so they are got rid of.

That is why you have to be prepared not to be too attached to anything, invent yourself, reinvent yourself… as Charles Bukowski said.

Don’t define yourself as a particular person, a guru or subject matter expert, constantly evolve seeking new challenges and opportunities.

Don’t get too precious about the goal…

You could say I was driven by my own ego, but I was determined to reach my goal.  I took great satisfaction knowing I started as “just” the office odd job boy, rising through the ranks, catching up and taking over people who looked down on me.

No matter what, I was going to be a Project Manager in my company.

Therefore, having the opportunity to lead a project, was my opportunity to show my capability to do the role and set myself up to achieve a massive long-term goal.

But as I’ve established, the organisation had other plans, and this took me away from my goal and because of my fanatical unbending determination to achieve the goal, contributed to my exasperation.

When you have goals, it’s important to have flexibility, especially with something that takes a long time to achieve.  A large goal can take one, two… five years to achieve, during that time the world will have changed.  You can’t rely on doing the same thing because it got you results in the past.

It’s a lot healthier to realise when something isn’t working, or unlikely to be achieved, meaning you have to change your strategy or direct your energy elsewhere.  Don’t stubbornly pursue something if the opportunity has passed, this isn’t necessarily failure, it’s adapting.

A Setback is not the end…

Life is like a project, it has a beginning, lots of phases, and then it comes to a close.  As you go through those stages some come to a natural conclusion like your education, some may have an unexpected premature end, like a relationship.

When it all goes wrong, you can make the best of it by:

Whatever you do in life, it’s about how you make most of the moments given to you, enjoy your success, learn from your failures and appreciate how far you’ve come.

When the first ever project was taken from me, it felt like an opportunity of a lifetime being stolen away, I wondered if I would ever get this chance again.  But this happened not by some unique phenomena when all the planets aligned, but by good, consistent performances to show I was capable in performing the role.

As I moved on life, more opportunities to be involved in other exciting projects came along, and eventually I realised my long-term goal, by becoming a Project Manager, in another company.

These setbacks can make you feel defeated, but it is not the end, far from it, usually it just means you are just getting started.  When it all goes wrong keep this advice in mind, these experiences are there to test you and make you grow.

Thanks for reading, wishing you the best success.

14 thoughts on “When it All Goes Wrong: Lessons from a Failed Project”