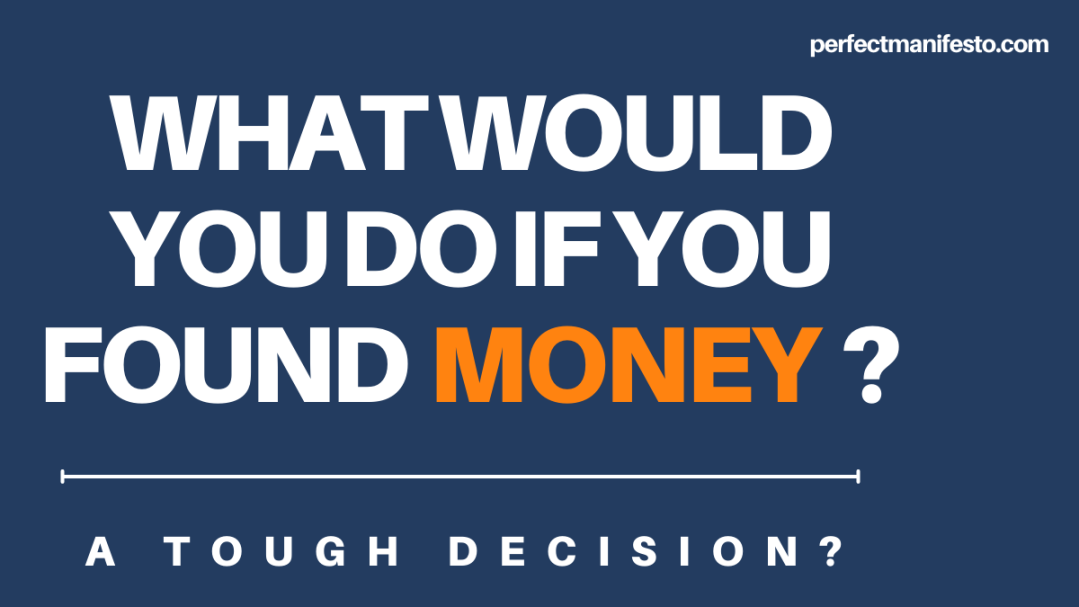 The other week I was out at the shops with my family. We made our way back to the car taking a shortcut through the market.

I climbed the steps and opened the entrance door, a gust of wind from the outside pulled a paper from within under my foot. Bending down to pick it up I realised this was a £20 note.

Apart from small bits of change I’d never found any money in my life. As I inspected to see if it was real, I saw more notes scattered all over the marble floor.

Four, five, six, I counted of the purple notes in all, totalling £120. I looked around to see if there was anyone who could have dropped it. Apart from the people walking behind me, no one was in sight who I was sure it could have belonged to.

What do I do now? Pocket it? Hand it in? Leave it where I found it?

My mind looked at it from different perspectives:

Once I was doing a small shop at an ASDA self-service checkout.

“Do you want cashback?” a message popped up as I went to pay on my card.

I selected ‘yes’ and got out £10. In the process of packing my shopping up, I forgot all about the note dangling from the machine waiting for me to take.

I remembered an hour later.

Returning to the store I asked a cashier if a note had been handed in. They called the manager, who let out a big sigh.

If it had been taken he’d have to contact the police and fill out a report, because to take money found without attempting to locate the owner is a crime by the law of England & Wales.

What is known as “theft by finding.”

This law can apply to the smallest bit of change (though most people have better things to do than concern themself with recovering £1), but if you take notes that have been left at a cash machine and are caught on CCTV, and someone attempts to relocate it, you face criminal charges.

Lucky for me, and the manager who didn’t have to fill in tedious paperwork, the £10 had been handed in.

Now being on the other side – does the thought that I’d be prosecuted persuade me to locate the owner?

I need to see what my conscience thinks….

As I clutched the money wondering what I was supposed to do with this prize my wife began to speculate who the money belonged to.

What if it belonged to an elderly person now in a state of distress because they had let their pension money for the week slip through their fingers?

Yes, I thought.  But what if it belonged to a drug dealer, or someone else who’d earned the money through some other ill gotten means? By duty I should take it!

When it comes to ethics what was the right thing to do?

What if I was that person?

I thought back to the years I struggled financially, and how it would have devastated me if I’d lost that sum of money. There would have been a time I wouldn’t have been able to afford to eat.

Legal consequences didn’t impact my decision, but my ethics – my beliefs of what is wrong, and what is right certainly did.

I began to investigate a safe place to hand back the money, and came over with thoughts feeling good about myself, and deep down wondering how I’d be rewarded in the bigger picture for my honesty.

For doing the right thing, I must be due a lot of good karma. I figured handing over £120 that wasn’t mine I was sure to be rewarded with even more!

With this logic I went and did what anyone would and bought a scratch card.

One week later I had to take my youngest to the Accident and Emergency department – she was okay, but returning back to the car I found a big yellow label attached to my windscreen.

I realised in the panic I’d forgot to get a ticket and was now subject to a parking fine!

I wasn’t feeling too appreciated by the universe for my honesty, 4 hours in a hospital waiting room, and am now £25 poorer for it!

Wondering why the whole karma thing wasn’t working, I did what anyone with a loose understanding of a subject matter does and decided to do a google search to see what the dictionary said:

(in Hinduism and Buddhism) the sum of a person’s actions in this and previous states of existence, viewed as deciding their fate in future existences.”

I guess if there is going to be some reward for doing the right thing, I’ll have to keep doing good throughout my life, and seeing what the next one gives me – either way that’s way too long to wait to write a blog post about the outcome.

When I handed over the money to the market security office, the man on the counter commented what a “good, honest, proper person” I was, and that “most people would have just pocketed it”

My face reddened with self-righteousness from my outright goodness, and my voice gave way a little, as I soaked in the compliments.

As I drove home from the shops, I questioned whether I handed over the money for just reasons.

If it hadn’t been so public, would I have kept the money for myself?

Did the thought of strangers seeing me take money that was not mine, push me to do the right thing

Do I deserve the bragging rights that I did the right thing?

If I found the money in the middle of a deserted field, would I have done the same?

If doing the right thing is a reward in itself? Why am I writing a blog post about my moral greatness?

I was told if no one claimed it after so many days, then by law I was entitled to claim the cash.

Talking with my wife I wondered whether I would see the money again. As I started to doubt my decision my wife said the following

“By handing the money in you haven’t lost £120 because it was never yours to begin with.”

I never realised my wife was such a philosopher.

There is truth in this – how can you lose something you never owned?

I’m a pretty lucky guy, I don’t need to take other people’s money, but when given the opportunity for easy cash it does raise many thoughts.

This led me to think about gratitude. When given the choice between giving up money or giving up a family member , there is no choice – it’s a bargain, and I’m eternally grateful for what I do have.

Wishing you the best in your success