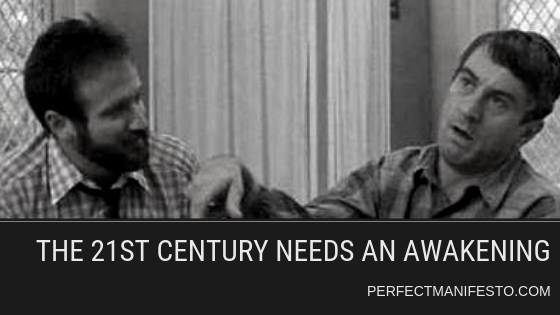 Recently I watched the 1990 film Awakenings with Robin Williams and Robert De Niro.

Robin Williams plays consultant Malcolm Sayer in a mental hospital, overseeing a bunch of patients in a catatonic state.

The staff generally have a widely accepted belief the people are dead inside, which Sayer rejects and starts pursuing work to try to make them more reactive.

In his search he comes across a drug called L-Dopa, which he believes may have positive effects on the patients and gets permission to experiment on Robert De Niro’s character Leonard, who by a miracle has an ‘Awakening’.

Soon he gets backing to apply the same drug to all the patients and they too awaken.

Unfortunately the effects are only temporary and Leonard, being the first to be administered L-Dopa begins to decline and the other patients watch in horror realising this will soon be their fate.

Eventually he  returns to his catatonic state and the view sees all the patients succumb back to their lifeless ways.

The film ends Robin Williams character making a strong message about making the most of life and in his own awakening finds the confidence to ask his nurse colleague out (Julie Kavner, after thinking why her voice sounded so familiar, realised I was listening to Marge Simpson).

For a 1990 film I couldn’t help view this through a 21st century lense:

The 21st century is stuck in a catatonic state with  technology, killing social interactions and leaving us in an unawakened state.

The film has an emotional scene where Robert De Niro is ‘reunited’ with his aging mother after decades of her loyally caring for him.

What would you do if you were reunited with a loved one for a few weeks?  I doubt you would be on your phone.

Awakening scene: After Robert De Niro’s character Leonards condition begins to decline, he break off a relationship he has built to avoid hurting feeling over his eventual fate.

Technology has its use, but it’s time to start being mindful how we use it.  I challenge you:

2 thoughts on “The 21st century needs an awakening”