I was running the Spartan race, doing a sprint distance course.  This is about four mile, which is not a difficult feat when running on pavements.  However this was an obstacle race, so I had mud, water, hills and urm… obstacles.

The obstacles were not a major problem.

Neither was the mud or the water, despite the fact I face planted directly into a puddle of water due to misjudging the deepness, I had chosen to sprint through.

It was due to the cold mud and water my leg started cramping really badly, I started limping, then slowing down, I was about to start haming up my cramp more a footballer does taking a dive in the penalty box, when I heard:

Instantly I regained my composure and ignored the cramp and within about a minute I had completely forgotten about it.

I don’t know who it was who gave me those simple two words to encourage me.  All I know it was a woman, who I assume from the tone of her voice may have been in her 30’s or 40’s.

She could have easily not said anything, she didn’t know me and I wasn’t even in a position to make eye contact.  But she saw me struggling and said those words.

It has been almost a year since I did the race, so it is a testament to the impact it had for me and out of all my memories from that race, it is the first thing I remember – even more than when I threw some mud at a really hot girl because she was complaining how muddy the race was. 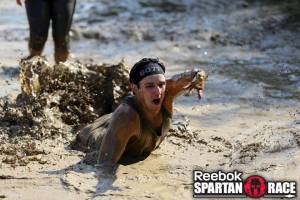 That day gave me an appreciation and importance of the role of a good audience in a sporting event.  They are part of the thrill of competing, psychologically they make me want to go faster purely because I don’t want to look shit.

But more importantly their enthusiasm pushes you through at the worst of times.  That voice cheering you through the finish line or telling you not to quit is not something you get at the gym.

When you watch races in the Olympics and see guys who have been doing miles in under five minutes go all out for the last mile, you understand what those spectators do.

It doesn’t matter if your lungs are aching, your heart feels like it will explode or your legs just want to collapse.  Seeing that crowd at the end cheering you on makes you put in that little bit extra that you didn’t think you had.

Due to that woman’s small actions it encouraged me to finish the Spartan race and do it in a much better time than if I had started walking to shift off the cramp. 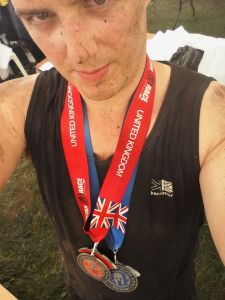 I encourage anyone serious about pushing their limits or testing their fitness to compete – rather than just going for a run or to the gym it gives us something to train for.

On the day it pushes your potential as you reach your limits and go beyond what you thought you could achieve.  Whatever happens don’t quit.